March was a pretty tumultuous month if you simply looked at the headlines. Ceasefire talks in the war in Ukraine  repeatedly broke down and fighting continued. The US ban on Russian energy imports also exacerbated the spike  in commodity prices, with oil running up to $130 per barrel early in the month. You also had the Fed hiking interest rates for the first time since 2018.

So, stocks started the month off trading lower, as all of the different geopolitical concerns, inflation concerns, etc. weighed on investor sentiment. But markets rarely move in a straight line, and by mid-month a deeply oversold market was due for a least a technical bounce. Investor sentiment had also grown increasingly bearish, which helped set things up for a relief rally. 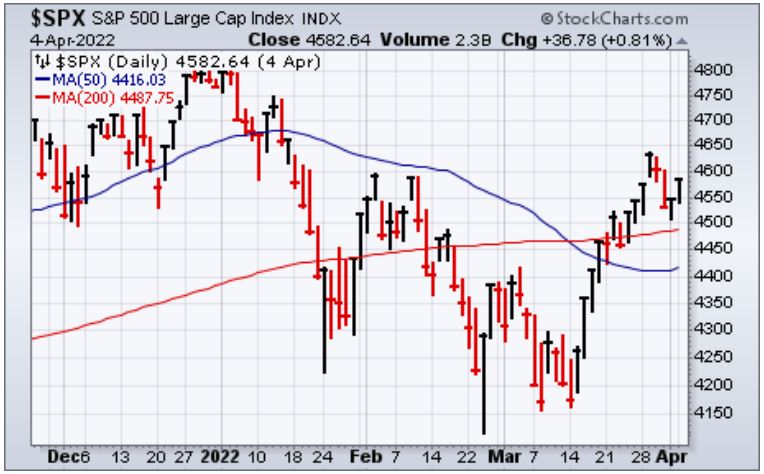 Past performance does not guarantee future results

As you can see in the chart above, the back half of the month was the polar opposite, with stocks rallying sharply and some market pundits even declaring that the market bottom is in, and the worst is behind us. Of course, we don’t share that view. We think markets are likely to remain choppy at best as the Fed is still in the very early stages of this monetary tightening campaign, one that is likely to be stronger than those in the past due to the severity of the inflation problem at hand.

The FOMC raised rates, and signaled it expects six more hikes this year. That is higher than the rate hike expectations that prevailed at the start of the year. The Fed also signaled that it could start to reduce its balance sheet in May. And the pace of this “QT” is likely to be higher than the last time they tried to reduce their balance sheet. The Fed’s balance sheet is much larger now, and inflation is much higher. So, in the near-term this is likely to be on of the strongest monetary tightening phases we have seen in some time. The three components of zero interest rates, low inflation, and QE have all morphed from strong tailwinds for the market into stiff headwinds. That means volatility is likely to remain elevated during this period.

The above doesn’t even begin to take into account the widespread Covid lockdowns being initiated in some of China’s biggest cities, and how that might exacerbate an already damaged supply chain. It would seem that all of the above would surely have a dampening effect on economic growth. Maybe that is why the yield curve – spread between 2-yr and 1-yr Treasuries – briefly inverted last month.

The ACM Dynamic Opportunity Fund (ADOIX) returned +1.58% in March, well ahead of the HFRX Equity Hedge Index which declined -1.51%. The Fund remains +141 bps ahead of the S&P 500 Index YTD, as we continue to focus on playing defense and minimizing drawdowns in a weak market.

We will continue to monitor our hedge models and focus on risk management. We still have an oversized cash position which should put us in an enviable position once the tide turns and the market bottoms.

Thank you for your continued support.

Defined Terms: S&P 500 Index- The S&P 500 index is an unmanaged composite of large capitalization companies. This index is widely used by professional investors as a performance benchmark for large-cap stocks. HFRX Equity Hedge Index– tracks strategies that maintain positions both long and short in primarily equity and equity driven securities. Morningstar Long/Short Equity Category- A composite of returns produced by Morningstar which can be used to compare the returns of other mutual funds in the same category. Long– the holder of the position owns the security and will profit if the price of the security goes up. Short- Short selling is the sale of a security that is not owned by the seller, or that the seller has borrowed. Short selling is motivated by the belief that a security’s price will decline, enabling it to be bought back at a lower price to make a profit. Derivative hedge – transaction that limits investment risk with the use of derivatives such as option contracts.

Investors are not able to invest directly in the indices referenced and unmanaged index returns do not reflect any fees, expenses or sales charges. For current performance information, please visit our performance page: http://acm-funds.com/dynamic-fund-performance/

There is no guarantee that any investment strategy will achieve its objectives, generate profits or avoid losses.

ETF’s are subject to specific risks, depending on the nature of the underlying strategy of the fund. These risks could include liquidity risk, sector risk, as well as risks associated with fixed income securities, real estate investments, and commodities, to name a few. Investments in foreign securities could subject the Fund to greater risks including, currency fluctuation, economic conditions, and different governmental and accounting standards.

The ACM Dynamic Opportunity Fund is designed as a core investment for investors seeking long term capital appreciation with a short-term focus on  capital preservation. The fund employs a dynamic strategy, which aims to actively participate during a rising market environment and mitigate downside  risk when markets experience downturns.

Investments in mutual funds involve risks. Performance is historic and does not guarantee future results. Investment principal value will fluctuate so that when redeemed, shares may be worth more or less than their original cost. Current performance may be lower or higher than the performance data quoted. To obtain the most recent month end performance information or the Fund’s prospectus please call the Fund at 1-844-798-3833. You can also obtain a prospectus at www.ACM-funds.com.

These fee waivers and expense reimbursements are subject to possible recoupment from each Fund within three years after the fees have been waived or reimbursed. You should be aware that the Fund’s past performance (before and after taxes) may not be an indication of how the Fund will perform in the future. Although Class A Shares would have similar returns to Class I shares because the classes are invested in the same portfolio of securities, the returns for Class A shares are different from Class I shares because Class A shares have different expenses than Class I shares. Updated performance information is available at no cost by visiting www.ACM-funds.com or by calling 1-8444-798-3833.  Actual Total Annual Operating Expenses of 1.95% for Class A and 1.70% for Class I from the prospectus.

There is no assurance that the Fund will achieve its investment objectives.

Mutual Funds involve risk including possible loss of principal. Adverse changes in currency exchange rates may erode or reverse any potential gains from the Fund’s investments. ETF’s are subject to specific risks, depending on the nature of the underlying strategy of the fund. These risks could include liquidity risk, sector risk, as well as risks associated with fixed income securities, real estate investments, and commodities, to name a few. Investments in underlying funds that own small and mid-capitalization companies may be more vulnerable than larger, more established organizations. Derivative instruments involve risks different from, or possibly greater than, the risks associated with investing directly in securities and other traditional investments. Investments in foreign securities could subject the Fund to greater risks including currency fluctuation, economic conditions, and different governmental and accounting standards. In addition to the risks generally associated with investing in securities of foreign companies, countries with emerging markets also may have relatively unstable governments, social and legal systems that do not protect shareholders, economies based on only a few industries, and securities markets that trade a small number of issues.

Investors bear the risk that the Fund may not be able to implement its investment strategies or attract sufficient assets. Purchased put options may decline in value or expire worthless and may have imperfect correlation to the value of the Fund’s portfolio securities. Written call and put options may limit the Fund’s participation in equity market gains and may amplify losses in market declines. The Fund’s losses are potentially large in a written put or call transaction. If unhedged, written calls expose the Fund to potentially unlimited losses. The Fund will incur a loss as a result of a short position if the price of the short position instrument increases in value between the date of the short position sale and the date on which an offsetting position is purchased. Short positions may be considered speculative transactions and involve special risks, including greater reliance on the ability to accurately anticipate the future value of a security or instrument. The Fund’s losses are potentially large in a short position transaction.

Price to Earnings (P/E) is a valuation ratio of a company’s current share price compared to its per share earnings. Gross Long and Short Exposure is the percentage in securities that are expected to rise and decline, respectively. Beta is a measure of systemic risk. Standard Deviation is a statistical measurement. It sheds light on the historical volatility of that investment. The greater the standard deviation of a security, the greater the variance between each price and the mean, indicating a larger price range. Treynor ratio – A performance metric for determining how much excess return was generated for each unit of risk taken on by a portfolio. HFRX Equity Hedge Index – tracks strategies that maintain positions both long and short in primarily equity and equity driven securities. S&P 500 Index – tracks 500 individual stocks chosen for market size, liquidity and industry grouping, among other factors.

Investors are not able to invest directly in the indices referenced in this illustration and unmanaged index returns do not reflect any fees, expenses or sales charges.

Link to Prior Monthly Updates