Fixed income markets came under pressure again in June amidst higher rates and rising inflationary pressures. For its part, the FOMC announced a 75 basis point increase in the fed funds rate to a level of 1.50% – 1.75%. This increase was actually the largest rate hike from the Fed since 1994. Futures markets continue to price in more rate hikes at subsequent meetings, with a high likelihood that the fed funds rate at the end of the year could reach 3.25% – 3.50%.

Most of the pressure on the Fed to ratchet up its pace and magnitude of rate hikes is in response to rising inflation. Last month’s CPI print rose to a new multi-decade high of 8.6%. This leaves the Fed further behind the curve which is why Fed governors continue to strike a more hawkish tone in each speech they give. Of course, the economy is slowing as we speak so the probability of the Fed actually reaching its terminal target rate gets lower by the day. If the economy gets into recession the Fed will likely have to strike a less hawkish tone. 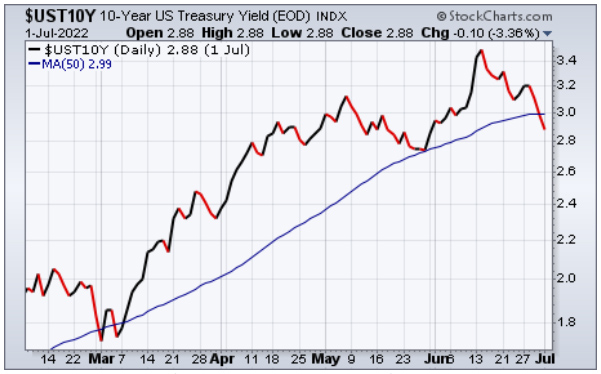 Past performance does not guarantee future results.

The blue line above represents the 50-day moving average.

The 10-year Treasury yield rose in the first half of the month after the strong CPI report, hitting a high near 3.50% before backing off. Yields ended the month only slightly higher than where they began. But in other parts of the fixed income market, inflationary pressures combined with slowing economic data caused more damage. High yield spreads widened over +160 basis points during the month, while prices of high yield bonds plunged. The yield curve – measures by 10-yr minus 2-yr yields – flattened considerably and is on the precipice of going inverted. This is another signal from the bond market that portends slowing economic growth.

Central banks around the globe are experiencing the same set of inflationary pressures. The number of rate hikes by global central banks hit its highest levels since 2008. And in many of those countries, the monetary tightening is double-barreled. That is, it’s not just rate hikes but also a reversal of asset purchases and quantitative easing that has existed for years and now needs to be reversed. This means that the era of ultrafast money supply growth is fading into the rear view mirror, and going forward investors will be facing an environment with far less liquidity to prop up valuations and dampen volatility.

The Fund continues to hold a high cash balance (over 60%), which keeps us in a defensive position. As forwardlooking inflation indicators look to be topping, more areas of fixed income could be making tradable bottoms. If so, we will monitor our models for opportunities to put cash to work.

We want to thank all of you for your continued support.

Investors are not able to invest directly in the indices referenced and unmanaged index returns do not reflect any fees, expenses or sales charges. For current performance information, please visit our performance page: http://acm-funds.com/tactical-income-performance/

There is no guarantee that any investment strategy will achieve its objectives, generate profits or avoid losses.

ETF’s are subject to specific risks, depending on the nature of the underlying strategy of the fund. These risks could include liquidity risk, sector risk, as well as risks associated with fixed income securities, real estate investments, and commodities, to name a few. Investments in foreign securities could subject the Fund to greater risks including, currency fluctuation, economic conditions, and different governmental and accounting standards.

We strive to help our investors participate in the gains available from financial
markets, while mitigating the downside risk.

Investments in mutual funds involve risks. Performance is historic and does not guarantee future results. Investment principal value will fluctuate with changing market conditions so that when redeemed, shares may be worth more or less than their original cost. Current performance may be lower or higher than the performance data quoted. To obtain the most recent month end performance information or the Fund’s prospectus please call the fund at 1-844-798-3833. You can also obtain a prospectus at www.ACM-funds.com.

The fund’s maximum sales charges for Class “A” shares is 5.75%. Actual Total Annual Fund Operating Expenses are 2.36% for Class A and 2.11% for Class I shares. The adviser has contractually agreed to reduce its fees and reimburse expenses of the Fund, at least until April 30, 2022, to ensure that the net annual fund operating expenses will not exceed 2.07% for Class A shares and 1.82% for Class I shares, subject to possible recoupment from the Fund in
future years.

Please review the fund’s prospectus for more information regarding the fund’s fees and expenses. For performance information current to the most recent month-end, please call tollfree 1-844-798-3833 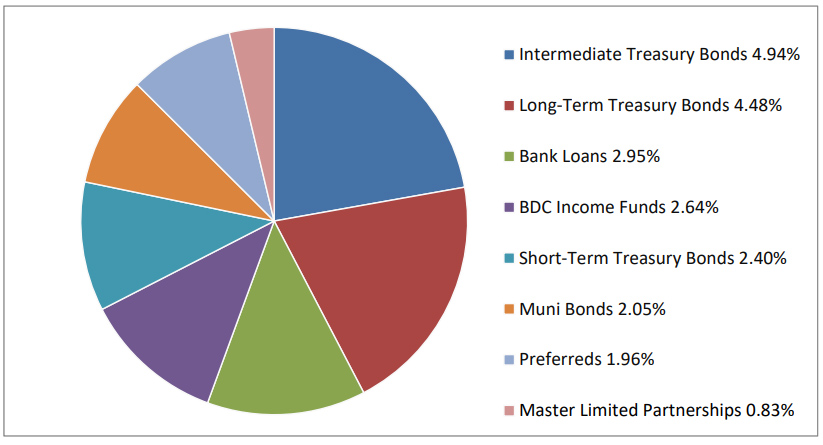 There is no assurance that the Fund will achieve its investment objectives.

Mutual funds involve risk including possible loss of principal. Adverse changes in currency exchange rates may erode or reverse any potential gains from t he Fund s Investments. ETF s are subject to specific risks, depending on the nature of the underlying strategy of the fund. These risks include liquidity risk, sec to r risk, as well as risks associated with fixed income securities, real estate investments, and commodities, to name a few. Investments in underlying funds that own s mall and mid capitalization companies may be more vulnerable than larger, more established organizations. Derivative instruments involve risks different from, or possibly great er than, the risks associated with investing directly in securities and other traditional investments. Investments in foreign securities could subject the Fund to greater risks incl u ding, currency fluctuation, economic conditions, and different governmental and accounting standards. In addition to the risks generally associated with investing in securities of foreign companies, countries with emerging markets also may have relatively unstable governments, social and legal systems that do no t protect share holders, economies based on only a few industries, and securities markets that trade a small number of issues.

Investors bear the risk that the Fund may not be able to implement its investments strategies or attract sufficient assets. Purchased put options may decline in value or expire worthless and may have imperfect correlati0on to the value of the Fund’s portfolio securities. Written call and put options may limit the Funds paticipation in equity market gain s and may amplify losses in market de declines. The Fund’s losses are potentially large in a written put or call transaction. If unhedged, written calls expose the Fund to potentially unlimited losses. The Fund w ill incur a loss as a result of a short position if price of the short position instrument increases in value between the date of the short position sale and the date on which an off setting position is purchase. Short positions may be considered speculative transactions and involve special risks, including greater reliance on the ability to accurately anticipate the future value of a security of instrument. The Fund s losses are potentially large in a short position transaction.

Beta is a measure of systemic risk. Standard Deviation is a statistical measurement. It sheds light on the historical volatility of that investment. The greater the standard deviation of a security, the greater the variance between each price and the mean, indicating a larger price range.

The Bloomberg U.S. Aggregate Bond Index is an unmanaged, fixed income, market-value-weighted index generally representative of investment grade fixed-rate debt issues, including government, corporate, asset-backed, and mortgagebacked securities with maturities of at least one year. The  Bloomberg U.S. Aggregate Bond Index figures do not reflect any fees,  expenses, or taxes. An investor cannot invest directly in an index.

Link to Prior Monthly Updates